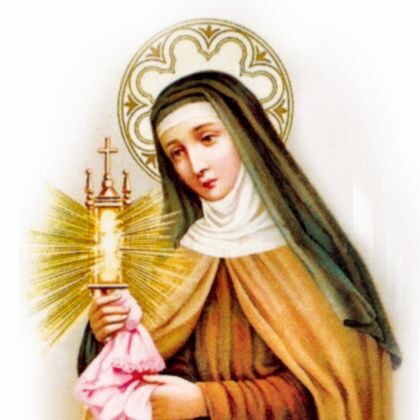 Clare (1193-1253) was born in Assisi the eldest daughter of Favorino Sciffi, Count of Sasso-Rosso and his
wife Ortolana. Ortolana was a very devout woman who had undertaken pilgrimages to Rome, Santiago de Compostela and the Holy Land. Later in life, she entered Clare’s monastery, as did Clare’s sisters, Beatrix and Catarina (who took the name Agnes and was later declared a saint herself). As a child, Clare was devoted to prayer. When she was a teenager, she heard Francis preach during a Lenten service in the church of San Giorgio at Assisi and asked him to help her to live in the manner of the Gospel.

On the evening of Palm Sunday, 20 March 1212, she left her father’s house and accompanied by her aunt Bianca and another companion proceeded to the chapel of the Porziuncula to meet Francis. There, her hair was cut, and she exchanged her rich gown for a plain robe and veil. Francis placed Clare in the convent of the Benedictine nuns of San Paulo, near Bastia. Her father attempted to force her to return home but she resisted any attempt, professing that she would have no other husband but Jesus Christ. In order to provide the greater solitude Clare desired, a few days later Francis sent her to another monastery of the Benedictine nuns. Clare was soon joined by her sister Catarina, who took the name Agnes. They remained with the Benedictines until a small dwelling was built for them next to the church of San Damiano.

On 9 August 1253, two days before her death, Pope Innocent IV confirmed that Clare’s rule would serve as the governing rule for Clare’s Order of Poor Ladies. Her remains were interred at the chapel of San Giorgio while a church to hold her remains was being constructed. At Pope Innocent’s request the canonization process for Clare began immediately. While the whole process took two years, the examination of Clare’s miracles took just six days. On 26 September 1255, Pope Alexander IV canonized Clare as Saint Clare of Assisi.

In art, Clare is often shown carrying a monstrance or pyx, in commemoration of the occasion when she warded away the invading soldiers of Frederick II at the gates of her convent by displaying the Blessed Sacrament and kneeling in prayer.

One Christmas Eve Clare was too ill to rise from her bed to attend Mass at the new Basilica of St. Francis. Although she was more than a mile away, she saw Mass on the wall of her dormitory. So clear was the vision that the next day she could name the friars at the celebration that Pope Pius XII designated Clare as the patron saint of television in 1958.

Stations of the Cross